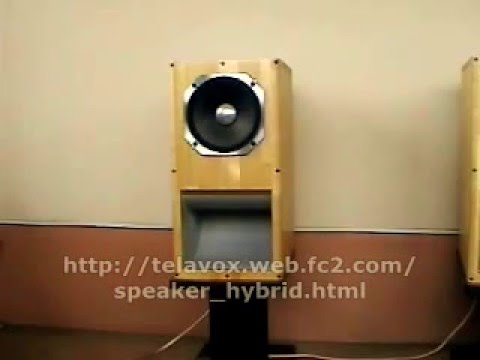 It must emulate as much as possible the single point source ideal. Any good speaker must cover the entire audible range of the source. A near perfect speaker must allow for playback at peak concert levels. It must also produce a large and accurate 3 dimensional image and therefore cannot be built into the walls of the room or be designed for placement against walls. The cabinet itself must be inert. A cone driver using a whizzer cone is not to be confused with a single driver.

With a driver of this size and f3 this low the MLTL can be designed to emulate an infinite baffle complete removal of the backwave but with dampening characteristics to provide higher efficiency. With baffle step compensation and careful stuffing of the TL the speaker produces a very flat response without cabinet colorations and the design eliminates out of phase signals.

In room on-axis response is essentially 25 — 20, Hz, with peaks reaching dB with 80 wpc inputs in a 2, cubic foot room without a whizzer. Bob believes in flat frequency response which the design and fiber fill allows for and he has also provided a baffle step compensation circuit. Purists may gasp at the thought of electronics added to a speaker, especially a single driver concept but plenty of circuits already exist in the overall audio playback chain.

Break in of these drivers is measured in the hundreds of hours, as are many other good extended range drivers. I picked up the speakers with reportedly hours already on them.

My first impression was thick and muddy.

Please note that due to current room and domestic restraints the speakers spend most their time almost tight against the walls of my 11 ft x 19 ft x 8 ft room with CD storage cabinet and equipment between them. Beaming of highs was quite evident. But depth of recording venue shows up very well. The beaming was expected, but should not be an issue with nearfield listening. The c200a bass was also expected with the current set-up, hopefully some experimentation will prove this to simply be a matter of placement.

And the bass imaging should also go away.

But the undynamic, inefficient behavior of the speakers is disturbing. And dynamics seem to have improved as well. Over the following weekend I pulled out the speakers a reasonable distance from walls and arranged them in a 68 inch equilateral triangle to my chair. I listened to a rather wide variety of music and at moderate to fairly loud levels.

Compared to speakers based on most extended range drivers the response was certainly tilted toward the bass end.

Compared to multi-driver speakers the sound is much more coherent but admittedly lacks fostec bit extension at each end compared to many of the more elaborate designs. After listening to them for two weeks at home the only aspect of their performance found lacking is life like dynamics.

A few more details: These speakers were a custom commission. The speakers are 48 inches tall, 14 inches wide, and 16 inches deep, with the driver centered 33 inches above the fosex. The panels around the driver are double thickness and braced with dowels producing a weight per cabinet in at about 70 pounds each. Bob was satisfied enough with the speakers that he was considering to add them to his web site as his third speaker offering, unfortunately he has heard that the Fostex FA and FA alnico drivers may be discountined soon.

If he builds more he wouldn’t finish the back side around the tube mouth to much of a PIA. Wifey just got a digital camera package and as soon as we figure it out I’ll f20a to post pictures. I’ll have to take a look. BTW Bob used very little stuffing just enough to even out the frequency responsein fact the back fold of the line has no stuffing at all. Final tweaking resistor change and permanent mounting of the BSC and permanent wiring of the speaker won’t occur until they are properly nested in my new listening room about June Fostec new fostez set-up JLM Very promising they ofstex to be Dmason Full Member Posts: Nice write up JLM, gives good insight into the design.

I have a pair of AlNiCo A’s on the way. 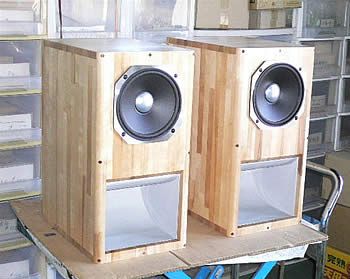 I did hear they will likely be discontinued, at least for distribution in North America, which was a major factor in my decision fostx get some. I will be using them to start, in a 25L BR cabinet, which, admittedly is less than optimal, but nonetheless will be a good home for them.

Fostex F A – Alnico/Fullrange buy at

From what I have read on the FA, they take sooo long to break in f20a probably there isn’t much point in coming to any conclusions good or bad before about six months of fairly regular play.

They evidently take far longer than about any other speaker out there. So, the start is a fine one, indeed. Martin King’s mass loaded transmission designs have been univerally praised. There is a good review of your cabinet with the Lowther DX I believe on www. I’m having to re-assess which of my recordings are “audiophile grade” as new life is f20a in them.

And they’re still gaining efficiency the longer they’re left on per session, maybe 8 dB in the first 30 minutes and a bit more afterward that. The break-in has gone from being a worry at times to rather fun. Two weeks more time put on the speakers f200w they’re sounding fstex everyday. My speakers now have a name: FTA See them here: Any line on tostex to find the drivers themselves?

Oh, maybe that was the more affordable FX So far, my favorite single driver is the pm2a Medallions, but I really can’t afford the drivers. Maybe one of these days I’ll try a Fostex project I’ll certainly be looking foward to hear anything you’ve got to say about your new speakers.

I bought the FA drivers from Madisound last spring. Fodtex had them in stock, no problem. Nice folks to deal with. I’ve heard that Fostex may stop importing them to the U. I haven’t done tons of serious listening as my current room set up is laughable and I’ve been very busy in part due to trying to get construction for a new bigger house, with dedicated listening room started. The dedicated room will allow for fosteex listening with lots of clear space around, proper proportions, isolated power, etc.

As I go through my collection I continue to find new detail or deeper bass than I remembered. Wifey mentioned the other day that they were sounding good. Always a plus, not that I really understand what she means by that.

I’ve listened to I. Fried MLTL speakers for the past 25 years, so much of what I’m hearing is very familar, nothing like typical punny single driver speakers with no bass. But the bass is somehow different from anything I’ve heard before. The depth of bass fostfx me from time to time, but the volume of it can be less than expected for the given depth. I did some very quick measurements using a RS spl meter and Stereophile test CDs a few weeks ago, but came to no real conclusion as I figure that they’re still breaking in and even with moving furniture f200z the setup was still less than ideal.

F00a continues to improve more open, more detail. At 48 I’m not missing the treble sparkle that a supertweeter could add, espeicially when seated on axis. Overall break-in is offering a very fun ride.

It is great to hear from a satisfied customer, who so well conveys what they like about what they have – nice series of posts.

Last weekend a couple of friends from the Decware forum came over with some of their stuff and spent the day. The original SE34I now updated offers two different output circuits via each pair of EL34 tubes that can each be run separately or combined in series or parallel for tons of flexibility.

Both sound similar, but my vote with these speakers is the Torii. The numbers say otherwise, but the Torii offered all the volume I need and has raised the bar significantly compared to the 6 year old wpc Rotel I own. Resolution in improved, dynamics are greater, imaging can be spooky good the amp is still breaking in after recent updates and bass is much more solid. I’m reporting all this to let folks know that a 90 dB efficiency single driver speaker we took the baffle step circuit out with good results that had been costing 2 dB can be a surprisely easy load to drive.

Single driver speakers rule. Have you had the chance to hear a digital amp on these speakers? I know that there are many advocates of this combination around here, and would be interested to hear your thoughts, if you get the chance.

All I can say is that digital amps with singles are a conversion on the road to Damascus for me. I cannot imagine what JLM’s outfit might sound like with a nice digital amp on it.

For vocal and instrumental music, the Jordan pipe is pretty hard to beat in any way at any cost. The amount of bass f200q from this design is hard to square with what’s going on. Mark, I’d really like to try a digital receiver as I could always use it to create a HT system if it didn’t pan out as a very good audio only amp.

But we’re trying to build a house starting yet this fall, so finances and time are both at a premium. Fostec Full Member Posts: What is the fostxe powered tubed amp you have used with these speakers?

I have a B SET amp that puts out 9 watts per channel as well as a DC powered 10 watts per channel SS amplifier, that was measured to about 17 watts until clipping and I wonder whether both would be decent matches to these speaker.